Finnish education and science policy stresses quality, efficiency, equity and internationalism, and it is geared to promote the competitiveness of Finnish welfare society (Ministry of Education and Culture, 2011a). Finnish education policy, educational legislation and the entire education system have changed significantly during the last two decades as part of a general restructuring of public administration due to economic, regional and demographic constraints. The former tradition of a system of regulation that was founded on detailed legislation and the principle of equality has been replaced with new governance, which is based more on individual choice, efficiency and evaluation. The emphasis is now on the development of a high standard of education as a necessity in the light of global competition. A cornerstone of this development was the reconstruction of educational legislation in 1998 (Varjo, 2007, III-IV; Helle & Klemelä, 2010; Poropudas & Volanen, 2003, 42). The current trends are based on neoliberalism, an internationally prevailing ideological paradigm that extends market logic also into education policy (Helle & Klemelä, 2010), and education is seen as a prerequisite for sustainable economic development.

There are only few private educational institutes and even those are part of the formal educational system, receiving state subsidies on the same grounds as municipal institutes. (Kumpulainen, 2010, 221) It can be argued that the very limited level of privatization of education providers is one example of the fact that neoliberalism has not fully penetrated Finnish education system. (Vanttaja & Rinne, 2008, 24)

Finnish education policy, educational legislation and the entire education system have changed significantly during the last two decades as part of a general restructuring of public administration due to economic, regional and demographic constraints.

Internationalization has facilitated spreading of transnational education ideas and ideologies, and it has also created pressure to unify and standardize education systems. This has been the case also in Finland, especially after joining the European Union in 1995. Transnational organizations are becoming increasingly influential in shaping national education policies. In addition to the EU, also the OECD has had significant influence on the Finnish education policy. In the 1990’s OECD had a key role in the establishment of polytechnics, which has been seen as the most substantial education reform in Finland after establishing the comprehensive school system in the 1970’s. The influence of OECD could also be seen in the implementation of a pilot project exploring comprehensive secondary education, i.e., a combination of general upper secondary education and vocational education and training (Vanttaja & Rinne, 2008, 21, 48; Helle & Klemelä, 2010).

Finland provides nine-year basic education with no ability grouping, and each age group is taught as a whole. Basic education has been mostly provided in neighbourhood schools as school districts but recently the principle of parental choice has become more and more the mode of action. Virtually the entire age group (99.7 per cent) completes the syllabus but the schools and classes have been differentiated (Kumpulainen, 2010, 221; Rinne & Järvinen, 2011; Ministry of Education and Culture, 2011c). The principle underlying basic education is still to guarantee basic educational security for all, irrespective of their place of residence, language and economic standing.

The number of comprehensive schools has shrunk by an average of a hundred per year during the 21st century. Because the number of pupils has not decreased to the same pace, downsizing the comprehensive school network has led to increase in the number of pupils in some of the schools, and also to the growth of class sizes (Vanttaja & Rinne, 2008, 28f.). Although most of the discontinued schools have been small village school, still over 40 per cent of schools have less than 100 pupils. The average school size has grown over the last few years, while the number of the largest schools with more than 500 pupils has increased (Kumpulainen, 2010, 27f.)

Free school choice policy is seen to contradict the goals of equal educational opportunity and equality also mentioned in the law (Vanttaja & Rinne, 2008, 26). According to Seppänen (2006, 4) the features of the lived education markets, where the school choice policy is conceptualized to take place in, in the Finnish cities are similar to those in other countries. Selection of pupils by their ability is vastly used, and on average, every other family considers applying or applies to another school than the neighbourhood school. Comprehensive schools have started to specialize and create individual profiles, but one of the goals is to strengthen the neighbourhood school principle and prevent inequality of schools (Vanttaja & Rinne, 2008, 26f.). In addition to the free school choice policy, another distinctive feature in the new Basic Education Act is the role of evaluation. The law obliges education providers to evaluate their education and its effectiveness. Education has to be evaluated also by external evaluators (Vanttaja & Rinne, 2008, 27).

Free school choice policy introduced to comprehensive school system in the mid 1990’s has sparked a lot of public debate in Finland.
It is seen to contradict the goals of equal educational opportunity and equality also mentioned in the law

Finland has repeatedly succeeded well in OECD’s PISA evaluations of 15-year-old school pupil’s scholastic performance. In the latest PISA evaluation Finland scored well above the OECD average in all the scales, and placed second in sciences, third in reading and sixth in math. According to Aho, Pitkänen and Sahlberg (2006, 126-133), there are six possible factors in the Finnish education system and society that may contribute to these PISA achievements. The factors include the following: 1) comprehensive school is same for all, 2) teachers are highly educated and teacher education stands out in international comparison for its depth and scope, 3) sustainable political and educational leadership, 4) recognition and appreciation of existing innovations (i.e. a culture of innovation in the education system), 5) focusing on deep learning instead of testing (the only standardized test in Finnish education system is the matriculation examination in the end of the upper secondary school), and 6) a culture of trust which is enabled by an environment that is built upon good governance and close-to-zero corruption. However in 2004 in an international comparative study by the World Health Organization, only a small minority of Finnish children and adolescent truly enjoy being at school (Rinne & Järvinen, 2011). 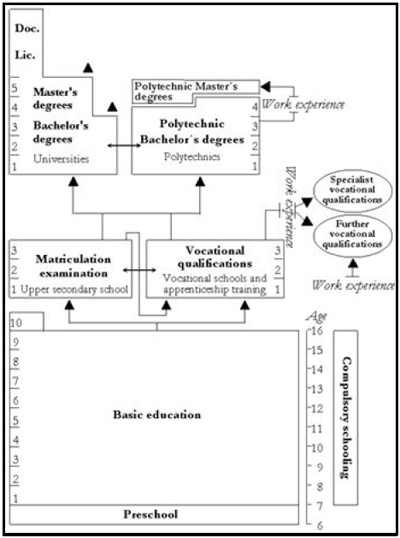 Vocational education and training and general upper secondary education constitute in principle  two parallel streams with no dead ends to higher education, that is universities and polytechnics, because since early 2000’s also vocational qualifications have led to general eligibility for further studies. In practise, only a very small minority of vocational school graduates continue their studies in universities, polytechnics being the more common alternative, in addition to going to the labour market (Rinne & Järvinen 2011; Helle & Klemelä, 2010; Vanttaja & Rinne, 2008, 35, 46).

Most providers of general upper secondary education are local authorities (Ministry of Education and Culture, 2011b) whereas the providers of vocational education are highly diversified including local authorities, municipal training consortium (i.e., joint municipal authorities), private providers and the state. According to Helle and Klemelä (2010), the most salient trend of the last two decades also in Finnish upper secondary education has been and still is the constant reduction of education providers and institutes.  For example the number of providers of vocational education and training decreased by 25 per cent and the number of vocational institutes by 35 per cent in the period 2000-2008. The reductions have mostly been implemented by merging institutes together, upgrading institutes to the status of polytechnic or closing them down altogether. Experts have estimated that the also the network of general upper secondary schools will be substantially cut down so that in the next couple of years approximately 100 schools, that is one in four or five schools, will be closed down (Vanttaja & Rinne 2008).

In the reform of 1999-2001 the duration of vocational studies was extended from two to three years and demonstrations of vocational skills were incorporated as a part of the regular curriculum. Also the regulations system underwent a major change when the providers were liberated from direct state control. The objective was to strengthen the collaboration between vocational institutes and working life. Adding a compulsory module of on-the-job learning (minimum of six months) to all vocational study programmes was another way of trying to assure closeness of the collaboration (Vanttaja & Rinne 2008, 44; Helle & Klemelä 2010). The meaning of international cooperation to Finnish vocational education has increased due to the Copenhagen Process launched by European Union in 2002. The goal of the process is to enhance the quality of vocational education, increase the attractiveness of vocational education and training, and to promote internationalization i.e. mobility of students (Vanttaja & Rinne 2008, 47).

Despite the increased popularity of vocational institutes, and the fact that dropout has diminished during the first decade of the 21st century, vocational schools still have the greatest dropout in upper secondary education in Finland. In the whole country approximately 11 per cent of vocational institutes’ students drop out of school. In addition, among vocational school dropouts, interruption of studies almost exclusively means dropping out of the whole education system more or less temporarily. Almost 50 per cent of the vocational education dropouts do not continue their studies in any other school and do not get employed either (Rinne & Järvinen 2011; Vanttaja & Rinne 2008, 45). During the last few decades, there have been attempts to reduce young people’s dropping out of education as well as interruption of vocational schooling, for example by increasing vocational guidance and individual counselling both in basic and secondary education, and by paying special attention to the teaching and learning of certain ‘risk-groups’ of young people. Similar kind of special education that has been available in basic education for decades has now been put to practice in vocational education and training as well (Rinne & Järvinen 2011; Vanttaja & Rinne 2008, 45).

The specialization of upper secondary general schools can also be seen as a part of the larger tendency towards individualization in the Finnish school system. 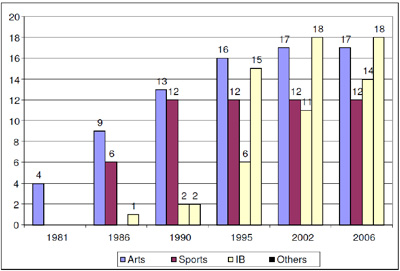 In international terms, young Finns spend a long time in education. In 2008, 43 per cent of people aged 20 to 29 were in education, whereas the OECD average for this age group was 25 per cent (Kumpulainen, 2010, 226). Long duration of studies is seen as a major problem, and speeding up transition from secondary education to higher education, graduating from higher education, and proceeding into working life is an important goal of the Ministry of Education and Culture. One problem related to this issue is that substantially more upper secondary school graduates aspire to higher education than the system admits. The Ministry of Education and Culture has recently reacted to this transition problem between secondary and higher education, and its objective is to eliminate bottlenecks by developing admission procedures. Several measures have been proposed, for example putting more weight on achievement in secondary education instead of entrance exams of universities and polytechnics, and creating an integrated system for applying to higher education including a separate channel for those already in higher education (Helle & Klemelä 2010) in order to expedite graduation, and thus proceeding into working life.

The most substantial challenges for Finnish society and thus for Finnish education will be maintaining society’s commitment to education, coping with changes in the economic structure and labour market, and with the regional polarization between large urban growth centres and rural areas as well as multiculturalism and the polarization of the whole society.

Currently National Coalition Party chairman, former Minister of Finance and the new Prime Minister of the new government (2011-) Jyrki Katainen has formed the government in which, in addition to the National Coalition Party, the Social Democratic Party, the Swedish People’s party, the Christian Democratic Party, the Green League and the Left Alliance will participate (the Six Pack). The populist and euro sceptic “Basic Finns”, who gained massive amount of votes and 34 new seats in the parliamentary elections held in April 2011, have surprisingly announced that they will drop out of the government formation talks and remain in the opposition. The Ministry of Finance will propose cuts of 800 million Euros that would mainly be directed to state subsidies for municipalities. This would strongly affect the funding of comprehensive and upper secondary schools. The composition of the new government, as well as whether or not the budget cuts even in the field of education will be implemented as planned, remains to be seen.